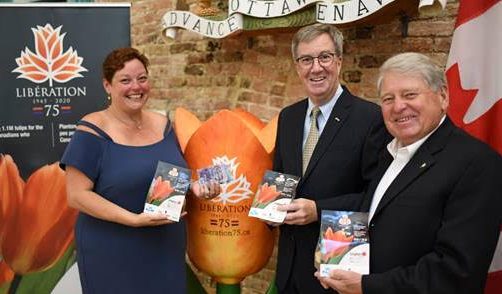 Ottawa — Ottawa Mayor Jim Watson issued a challenge today to the residents and businesses of the National Capital Region to use their lawns and gardens this fall to help “Paint the Town Orange” next May. Mayor Watson and the Canadian Tulip Festival are challenging residents to match the National Capital Commission’s October planting of 100,000 Liberation75 tulip bulbs, set for a springtime blooming in Canada’s capital. These special Liberation75 tulips are part of a national gardening program to commemorate the 75th Anniversary of the liberation of the Netherlands by Canadian led troops in 1944 and 1945.

To launch the campaign today, Mayor Watson purchased one of the first bags of 15 Liberation75 tulip bulbs, which he will be planting at home this fall. The City of Ottawa also purchased 300 bulbs – or 75 tulips per bed, which will be planted in front of the Heritage Building at City Hall to mark the 75 years since the liberation.

The goal of the Liberation75 planting initiative is to see 1.1 million brilliant orange, exclusively named Liberation75 tulips blooming across Canada next spring. The 1.1 million figure represents one bloom for each Canadian who served in the Second World War. In May of 2020, the world will mark the 75th anniversary of the Netherlands Liberation Day, which took place on May 5, 1945.

The planting initiative is being led by the Canadian Tulip Festival, in partnership with the Embassy of the Kingdom of the Netherlands, the National Capital Commission, the Royal Canadian Legion and KLM Royal Dutch Airlines. The Dutch Embassy announced last May at the Canadian Tulip Festival that the Netherlands would be honouring Canada’s role in their country’s liberation by repeating their 1945 tulip bulb gift to Canada, this time with 100,000 Liberation75 bulbs to initiate the Liberation75 program.

Mayor Watson is now issuing a challenge to the residents of the National Capital Region to double the NCC’s anticipated 100,000 regional Liberation75 blooms by purchasing and planting an additional 100,000 bulbs in residential yards and gardens on both sides of the river. The Mayor is asking residents and businesses to help “Paint the Town Orange” by planting tulip bulbs this fall in preparation for next spring’s joint Dutch-Canadian celebration of the liberation of the Netherlands and the end of the Second World War.

“Ottawa has a special reason to be involved in the effort to plant commemorative tulips in the nation’s capital and across Canada,” said Mayor Jim Watson. “Canada’s capital played host to the Dutch Royal Family during the Second World War, while our soldiers were leading the fight for their liberation. In gratitude, Canada received 100,000 tulip bulbs from the Dutch Royal Family in 1945. That original gift led to the tulip becoming the official flower of Ottawa, but also to the tulip becoming the well-recognized symbol of the nation’s capital for all Canadians.”

Mayor Watson and Ottawa’s tourism community expect that a large number of Dutch travellers will visit the National Capital Region next spring to thank Canada for its war efforts, and he hopes those visitors will be greeted by a sea of orange tulips across the region.

Information on the Liberation75 commemorative planting initiative can be found on-line at Liberation75.ca.